Eurasian milfoil is an aquatic invasive species that can grow into thick surface mats that interfere with swimming and boating activities and crowd out native fish and plant species. It is not native to North America, likely arriving in the 1940s. Today, however, it is found in lakes and ponds across much of North America. Milfoil plants grow through a root system and also from fragments that float downstream or are attached to boats or their propellers. The fact that the plants spread so easily, coupled with a growth rate of a foot a week in the hot summer months makes this plant extremely invasive if left unchecked. Any disruption to the water, such as flooding, outboard motors, or other disruption easily causes fragmentation and the spread of the plant.

Milfoil was first found in Lake Rescue in 1998. The LRA Board at that time acted quickly to employ divers to hand pull the discovered plants and each following year divers have been employed by the association to survey the lake. From 1999 to 2003 our paid divers searched and removed about 100 milfoil plants. Lake Rescue was free of milfoil from 2004 until 2013. Tropical Storm Irene hit our region in 2011 and the massive inflow of sediment from that storm into our lake made it difficult to search for milfoil in 2012 and 2013, when the first, new milfoil plant was found. The LRA Board increased the number of days in 2014 and 2015 that divers were employed to survey and hand pull milfoil plants. In 2014, LRA began its Greeter Program, greeting boaters at the Fishing Access boat launch to check for plant material on boats. In 2015 LRA hired Shane and Cat Yoder, who have solid experience recognizing and hand extracting milfoil.

Despite the efforts of the divers, a significant increase in milfoil plants was found in Lake Rescue in 2015 (see comparison maps); divers found no Eurasian Milfoil in Lake Pauline. In 2016, LRA commissioned the Yoders to increase their visits to twice a week, which has been effective in stopping the expansion of milfoil. We also marked off the worst area in Round Pond to keep boats out, and obtained a ‘suction harvesting’ permit, in case hand-pulling became insufficient.

In 2017, our divers visited our lakes 31 times. During these visits they hand pulled approximately 1,000 milfoil plants with their roots and placed them in mesh bags. While they reported that milfoil has spread to more locations, there were no dense patches nor multi-stalked second-year plants found. Most of the plants found were young and growing sparsely. This is hopeful news. We also expanded our Greeter Program at the boat launch to cover more days.

By employing the divers for the last three years, we have greatly diminished the potential spread of milfoil and choking our lake with weeds. However, milfoil is akin to a chronic disease which cannot be 'cured' once it is in the system. Only continued vigilance and constant removal of new growth can we hold the milfoil at bay.

In 2015, LRA spent $8,100 for 13.5 days of diving activity. In 2016, those days increased, costing $12,750. In 2017. In 2017, the visits increased again for a total cost of over $15,000. These costs are funded through state grants and member donations to LRA’s Rescue Our Lakes fund. If we continue to receive donations and the milfoil problem does not increase substantially, this funding should be adequate. However, if it does become worse, our costs could rise exponentially. Some lakes in Vermont spend over $200,000 every year battling milfoil.

Milfoil is not difficult to identify. It typically grows in shallow (less than 20 feet) water and the tops of the plant, both stems and leaves are often red.

It has a stem with whorls of four featherlike leaves. Each leaf is finely divided into 12-21 paired leaflets. The plants grow up from the bottom up to the surface and can have many side stems. If you see such a plant DO NOT try to remove it. Rather, email us right away with the location at lakerescueassn@gmail.com.

We will have our divers come and investigate the next time they are at the lake. It is illegal in Vermont to transport Eurasian watermilfoil, along with zebra mussels and water chestnuts, on boats and boating equipment. Any person found transporting any of these species to or from a Vermont lake or pond will be in violation of this law. Penalties for violations could include fines, imprisonment, or both (pursuant to 10 V.S.A. §1266). 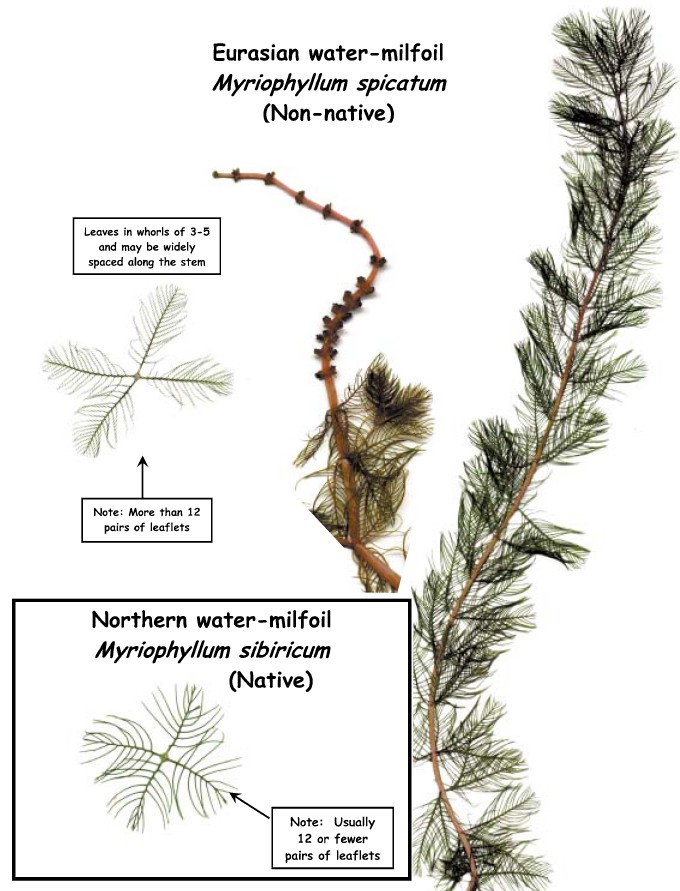 Find out what LRA is doing

Learn more about what we're doing to help protect our lakes.